What is user experience? Is it a proper term or a convenient buzzword to define more intangible components of design? There is no unity among the design and programming crowd: some use it to avoid saying anything definite about why this or that design works or doesn’t work, some try a more scientific approach. Either way, it is fascinating how many misconceptions, inconsistencies, and outright lies are surrounding the concept – and today we will cover some of the most blatant cases.

Good UX is all about providing the user with as many options, features and possibilities as possible to cover all potential needs – right? After all, a versatile website, a web application by definition, has to possess many options so that visitors never find themselves wanting to do something and not being able to do it. 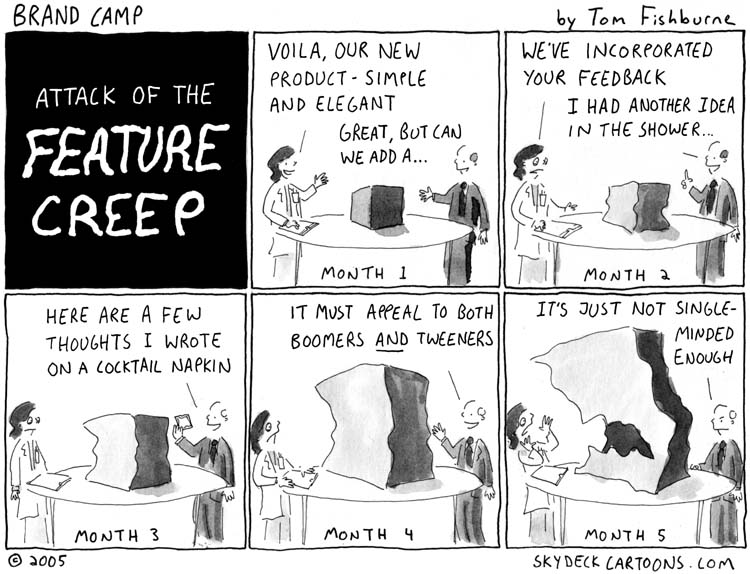 Unfortunately, this is exactly how many web developers think, neglecting one of the most basic marketing psychology lessons in existence – namely, that too many options result in the so-called decision paralysis. More isn’t always better – remember the famous jam study? People who have to choose from among six varieties of jam are ten times as likely to buy than those selecting from among 24 varieties – and the same goes for options. When a visitor is presented with too many options, features, links, categories, filters and so on, he or she may be impressed by the variety but often find themselves confused by it and at the end of the day opt for something simpler.

2.   You Should Design Exactly What Your Users Want

User feedback is one of the most important things about determining whether UX is successful or not, but you shouldn’t fall into the trap of blindly following what your users say they want it to be. Although there is hardly anything more annoying than a developer who stubbornly refuses to acknowledge his or her mistakes and keeps a wildly unpopular feature, you should understand that a good developer concentrates on what users need and not what they want, for these two don’t necessarily coincide or even overlap. Sometimes they only think they want what they say they want, and when you actually follow their wishes, it turns out that in reality, it works much worse than the way things were. Sometimes their wishes simply signify the presence of a problem – and an inspired designer should take time to have an efficient user research process, where he can analyze and decide what these wishes originate from in the first place.

If there is one thing to characterize the entirety of design trends of the last few years, it is a tendency to minimalism bordering on obsession. Somehow, designers were led to believe that good design is always minimalistic, and if it looks minimalistic, then it is almost certainly a job well done. However, as any expert in PHP development will say to you, one shouldn’t mix up minimalistic style with inherent simplicity in structure. Often a minimalistic design is just a cover for an extremely complex and complicated internal workings that don’t become obvious until you look under the app’s hood. What’s even worse, sometimes striving to make the design as minimalistic as possible leads to complications in user experience – for example, while icons without text labels may look clean and simple, they are often confusing and harm UX.

When it comes to decorative elements, none are more widely used than photos of humans, most often – of human faces. Many studies claim that people tend to feel some personal warmth when dealing with websites and web apps featuring them. They say, human faces create personal appeal and allow the organization behind an app to be perceived as a collection of individuals rather than a faceless corporate machine.

However, there are several problems with that. Firstly, this idea is overused: you encounter inanely grinning faces wherever you turn on the Internet, which is both boring and annoying. Secondly, all too often web app creators use stock photos for decoration, and instead of creating a personalized approach it results in a façade that looks incredibly false and cheap.

One of the oldest axioms in web development and web design states that all parts of your app should be reachable within three clicks from the front page lest a visitor leaves for better pastures. Real studies, however, do little to support this idea – in fact, it seems that the number of clicks has little to nothing to do with the visitor retention rate. What really matters is the concept named “information scent” – as visitors look through a website, they get certain cues, compare what they see with their personal experience, and by it judge what their chances of finding what they are looking for are. If information scent is strong enough, they won’t mind making a couple or even a dozen extra clicks. If, however, a visitor immediately understands the site doesn’t contain the info he or she is seeking, it won’t matter how many clicks are necessary to reach the parts they aren’t going to visit anyway.

Of course, these two concepts overlap and have a lot in common, but thinking them to be one and the same means simplifying the situation. UX is a complex entity resulting from the synergy of technological, psychological, market and social aspects, deep analysis of the ways business interacts with clients, and encompasses everything from the look of your web app to the way your support team talks to the customers. UI is “simply” a visual aspect of this construct, something that is important but by no means comprehensive.

This myth is an ambiguous one because there is a thin line between a trend and evolution. If you compare modern websites with websites of fifteen years ago, you will see that they’ve evolved a great deal and, frankly speaking, modern ones, on average, are more convenient, better at their job, and just plain better looking. Honestly, the credit goes to the tremendous rise in web app development services. After all, if somebody starts following a particular trend, it means that there is something valuable in it.

However, there is a difference between adopting a trend and blindly following it. Although it is quite possible to create excellent websites using WordPress themes, it doesn’t free you from the need to bring in something unique and original. Disproportionate percentage of modern websites and web apps basically use one and the same design with very minor variations. If your app looks indistinguishable from thousands of others, it is probably time to start thinking about separating from the fold.

If you think of it, this idea is nonsensical. UX is by definition modular, it can and will be changed, upgraded and replaced part by part in future. So why put off testing until everything is done, so that to correct a minute mistake it will be necessary to dismantle everything connected with it?

UX specialists are relatively few, and the concept itself still isn’t very clearly defined – which is exactly why it is so important to understand every myth surrounding it to be capable of making your own decisions, and not just to listen to self-proclaimed gurus.

We really appreciate you for visiting PremiumCoding and reading this article! Now you might also want to check out our Themes here.

What it Actually Takes to Accept Cryptocurrency on Your Website

How to Setup WordPress Multisite Network?

Cooments on Myths about UX Design in Web Application Development